An Ode To The Mandalorian's Frog Lady

Spoiler alert through the most recent episode of The Mandalorian!

When The Mandalorian launched last year on Disney+ it became an overnight sensation thanks to the introduction of the adorable Baby Yoda (aka "The Child" which, like fetch, Disney keeps trying to make happen) and his cute little face. There's no doubt about it: Baby Yoda is absolutely precious, thanks to his giant expressive eyes, big ol' ears, and endless curiosity, and I believe that his appearance revitalized the Star Wars universe when it desperately needed saving after a less-than-stellar sequel trilogy.

When the second season returned a few weeks ago, I was reminded once again how much I would die for Baby Yoda. However, the second episode introduced a new character who may have taken over as the most adorable creature in The Mandalorian universe. I'm talking, of course, about Frog Lady.

Frog Lady is an absolute legend, full stop. She's got a backpack full of eggs like an amphibian Dora the Explorer, a love of spa days, and cute facial expressions that rival those of Baby Yoda himself.

When we first meet her, she offers information on where other Mandalorians reside if our Mando (Pedro Pascal, though I'm convinced it's almost never him actually in the suit) can give her a lift to another planet so she can reunite with her hubby and get those aforementioned eggs fertilized.

Like all great side characters, Frog Lady is a woman of mystery. She does not speak the common language, so we don't get a lot of her backstory, such as why she and her eggs are chilling on another planet away from her husband, or even her proper name, but that's okay. What we do get is more than enough, and her expressive features do a lot of work to win us over. She doesn't put up with Mando's moodiness, making exasperated noises when he drives like a crap cab driver. She even reprograms a decommissioned droid to yell at Mando when he tries to take a nap instead of fixing the ship so they can get back to her man.

Most iconic of all, Frog Lady is a self care queen. Moments after telling Mando there is no time to waste, she peaces out to a lovely hot spring in the middle of a cave, one that is evidently home to hoards of giant spiders. If she's gonna wait around for Mando to fix the ship, she might as well do so while exfoliating her skin and getting a nice soak in. She gets it.

Frog Lady also has to put up with the creature who tries to out-cute her, Baby Yoda himself. In a pretty controversial move, Baby Yoda actually eats several of Frog Lady's unfertilized eggs, stealing them when she isn't looking and potentially threatening the continuation of her family line. Rude!
Look, I love Baby Yoda, but honestly I was pissed at him for doing this repeatedly, even after he is scolded by Mando. I get it, he is a baby, but I think we've seen by now that Baby Yoda has enough of a sense of right and wrong to know he should not be eating the unborn children of Miss Frog Lady. Between that and his force choke last season, perhaps Baby Yoda is more in tune with the Dark Side than we thought? But that's for another discussion.

Despite Baby Yoda being the absolute worst to Frog Lady, she is a forgiving soul, even babysitting him while Mando goes off on a quick space pirate adventure with other Mandalorians. Baby Yoda gets to experience the miracle of Frog People eggs hatching, so maybe he'll finally lay off eating the eggs? The fact that Frog Lady chose to teach Baby Yoda through compassion instead of reprimanding him...we stan a merciful queen.

And of course, we cannot forget the most beautiful Star Wars love story since Han and Leia. After a harrowing journey of ice spiders, bad piloting, and egg theft, Frog Lady is reunited with her Frog Man. When I tell you I GASPED when she spotted him through the crowded port, I was so excited for her. Don't even try and say you didn't tear up during this reunion. 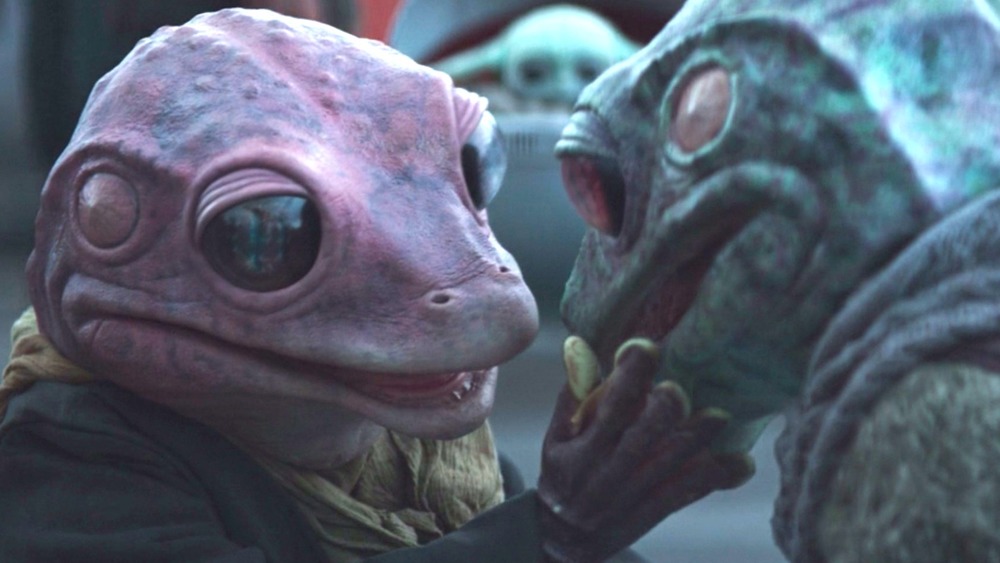 Seriously, LOOK AT THESE TWO. I want what they have.

Anyway, Frog Lady is an icon, and I'm so happy she got her happy ending. I hope we get to check in on her again, though I'm also content to know she's living a peaceful life with her family and away from the menace that is Baby Yoda.
baby yoda frog lady lindsey star wars television the mandalorian tv show